What Attention Should We Give The Devil?

Alistair Begg quotes this poem from an unknown author (quoted by G. Campbell Morgan at least 100 years ago in The Westminster Pulpit, book 3-4, pp. 183-208 and perhaps from New Zealand’s Alfred J. Hough around 1885) that I heard this morning while listening to his sermon of the second half of Daniel 7. The point of his use of the poem was that not many followers of Christ and certainly not many Americans take the Devil or his work seriously. Here’s the poem:

Who Does the Mischief?

Men don’t believe in a devil now,
As their fathers used to do;
They reject one creed because it’s old
For another because it’s new. 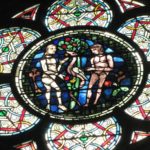 There’s not a print of his cloven foot,
Nor a fiery dart from his bow,
To be found in the earth or air today!
At least—they declare it is so!

But who is it mixes the fatal draught
That palsies heart and brain,
And loads the bier of each passing year
With its hundred thousand slain.

But who blights the bloom of the land today;
With the fiery breath of hell?
If it isn’t the devil that does the work,
Who does? Won’t somebody tell?

Who dogs the steps of the toiling saint?
Who spreads the net for his feet?
Who sows the tares in the world’s broad field.
Where the Saviour sows his wheat?

If the devil is voted not to be,
Is the verdict, therefore, true?
Some one is surely doing the work
The devil was thought to do.

Who dogs the steps of the toiling saint
and digs the pit for his feet?
Who sows the tares in the field of time,
wherever God sows His wheat?

The devil is voted not to be,
and of course, the thing is true,
But who is doing the kind of work
the devil alone should do?

We are told he does not go
about as a roaring lion now,
But whom shall we hold responsible
for the everlasting row

To be heard in home, in church, in state,
to the earth’s remotest bound,
If the devil by a unanimous vote
is nowhere to be found?

Won’t somebody step to the front forthwith,
and make his bow and show
How the frauds and the crimes of the day spring up,
for surely we want to know.

The devil was fairly voted out,
and of course, the devil is gone.
But simple people would like to know,
who carries his business on?

So if you haven’t seen or read C. S. Lewis’s book, The Screwtape Letters, let me recommend it. It provides a biblically informed fictional look at what may be going on in the spiritual world as a younger demon, Wormwood, is mentored by his Uncle Screwtape as they try to prevent a salvation then work to harass the new believer.