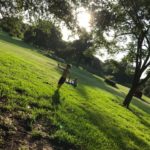 Towards the end of May, I decided what I wanted my summer landscape to look like. Not in the form of bucket list ideas or home project dreams, which was admittedly a little different from my normal, annual approach.

Then it hit me. I knew what I wanted my summer to be, what I was called to do with this season:

I wanted to go inside. I wanted a change of pace. But I told myself I would stay five more minutes longer than I really wanted to, and then I would see what happened.

I’m glad I saved this post for September because I have the opportunity to share how this little experiment went instead of only my potential outcomes and hopes.

Those five minutes with my son brought much joy, but I didn’t find out until later that it was also birthing something else.

Those five minutes catapulted me to spend five more minutes with an old friend on a park bench. A language barrier, a huge age gap, and a list of things that would have entertained me more usually would have called me to stand up and end the conversation. Instead, I sat back and made myself comfortable on the bench.

Those five minutes spurred me on to more moments with others throughout the summer. Each time, blessings were mutually shared.

The urge to linger longer caused me to think of Someone who lingered longer on this earth than He ever had to, faced things He never wanted to—especially separation from His Father. For 33 years, He lingered longer. He had conversations, He taught, He loved, He gave all. I’ll be forever grateful He did.

It also caused me to ponder those who gave extra time to me in my life and who influenced me because they willingly sacrificed “five more minutes” when they didn’t have to.

My challenge is this:

Who made a difference because they gave? Describe the scene. Why was it meaningful to you and what difference did it make on who you are today as a man? As a woman?

2. Be purposeful in your fall scheduling.

Let our drive to give in this way influence our planning for this next season. As you start to fill in your activities for the fall, label one of your activities, “MARGIN.” Until the idea of “staying” becomes a mental habit adopted by us, even uncomfortably at times to give a few more minutes, we won’t have the time for it.  Allow time in your schedule to linger longer, so you will have those five minutes when the situation presents itself.

You may be surprised at how God can multiply your willing five minutes to influence a life beside you.

Linger longer, and when you do, you’ll not only speak life to those around you, but you will have the ability to wave goodbye to any season passed with confidence and peace.

Courtney Strong lives in Houston, Texas, and is a licensed professional counselor, author, and speaker. She and her husband, Josh have been married for twelve years and love raising a young superhero and charming little princess.